Today, we’re speaking with two couples – Laura and John, and Peter and Julie – good friends who decided to buy a home together in the east end of Toronto.

Jordan: So, prior to buying this home together, where did you all live?

Laura: Before this, John and I rented a bungalow in Leaside for about two years.

Julie: Peter and I met in Switzerland, so we lived together in an apartment there before deciding to come back to Toronto.

Jordan: Did you always want to buy a house together? Or did you ever consider buying solo?

John: Laura and I had been looking in a couple of areas before Julie and Peter moved back, but nothing really appealed to us.

Laura: And unfortunately, with the crazy real estate market, the prices of houses for John and I on our own were not even feasible.

Julie: It was kind of funny. When Peter and I decided to move back to Toronto, we said to Laura and John, "Hey, do you want to live together?" We had the idea in our heads for a long time, and it just seemed to make sense for both couples.

Jordan: Do you all live in one space now? Do you share one kitchen and one bathroom?

Peter: Sort of. John and Laura have the second floor, as well as the third floor, which they rent out. Julie and I have the first floor and the basement, which has been turned into a beautiful bedroom, nursery and bathroom. Basically, all four of us live in the first floor space all the time, which gives us a lot of help with our young daughter, Ella. It works out perfectly.

Julie: Technically, the place is three separate units, though the doors never really get locked.

Jordan: So Julie and Peter live on the main floor and basement as one apartment, and John and Laura have the second floor and third floor, which they rent out. How did you decide who gets which apartment?

Julie: When we looked at splitting up the apartment, Peter and I knew that we were probably going to start a family soon after moving in. So we were looking for a slightly bigger place with a nursery. When we saw the place, the first floor and the basement made perfect sense for us.

Laura and John didn't need the space immediately, and so the second floor seemed to make sense for them. We figured out that the square footage from the main and the basement was basically equal to the second and the third floor. The advantage to Laura and John of taking a smaller apartment was that they could get rent from the third floor to put towards the mortgage. Win-win for both couples.

John: Yes, and you two didn't want to live through a renovation; you preferred something more turnkey. I wanted to put my own spin on the second floor.

Laura: We split it two ways, 50-50 between the two couples. That includes mortgage payments and the down payment.

Jordan: And what about monthly expenses like property tax and utilities, how do you split those up?

Laura: Property taxes we pay quarterly and split 50-50. Julie manages the utilities and I handle Rogers. Again, everything's split down the middle

Julie: When it comes to utilities, our places are very comparable in square-footage, so we ended up just splitting it 50-50. Even though Laura and John have a tenant, it works out for us to split it evenly.

Laura: And the tenant's rent includes utilities. One flat rate.

Jordan: How about general maintenance issues and improvements around the house? How do you split those?

Laura: John and I completely renovated the second floor when we moved in. Because it was adding value to the house, and because Julie and Peter's unit was already renovated which made the initial purchase price higher, we ended up splitting the renovation costs 50-50. Everything that we've done since we moved in, like replace the windows, has been split 50-50.

Peter: Julie and I, ideally, wanted to move into a place that was already “done”. But if we had ever had to renovate our floor, we all agree that it would be split 50-50.

Julie: Our rule of thumb is that anything that adds value to the property gets split 50-50. For example, if you break something in your own unit, you have to pay for it. Or if Laura and John’s tenant were to break something upstairs, they would have to pay for it because it’s their unit. Anything that adds value to the house or is a maintenance issue affecting the house gets split.

Laura: We run expenses through a joint bank account. We both deposit money out of our personal accounts into the joint account each month, and the payment comes out of there. We also add a little extra money each time for ‘miscellaneous.’

Julie: It’s a good way to set it up and manage the money.

Jordan: Have you ever had a situation where one couple wanted to do an improvement or a renovation and the other couple didn't?

Peter: The windows. It was actually three to one. Laura, John, and I wanted to do it and Julie wanted to wait a bit. At the end of the day, we discussed it a little more and reached a unanimous decision.

John: Julie just wanted to do them in separate sections, starting with the ones that needed doing right away.

Julie: I like to see the big picture so I was worried about what would happen if we had to do something big, like the roof, at some point. But we did an analysis on the house and decided that the windows were most important, first and foremost.

Peter: She’s definitely the financially savvier one in our couple. So, at the end of the day, it’s a smarter decision for her to take control of the finances.

Jordan: Okay, now onto the tough questions. Do you have an agreement that would cover contingencies, such as if a couple gets divorced, someone dies, or a couple loses their jobs and can't afford maintenance. What would happen in any of those situations?

Laura: Our mom's a lawyer, so we did talk about it, though we actually never ended up putting anything in writing, which may not be the smartest idea. For us, I think it's a little bit different than going into a co-ownership with a casual friend or with people that you may or may not know. We trust each other, and hopefully nothing happens in the future. 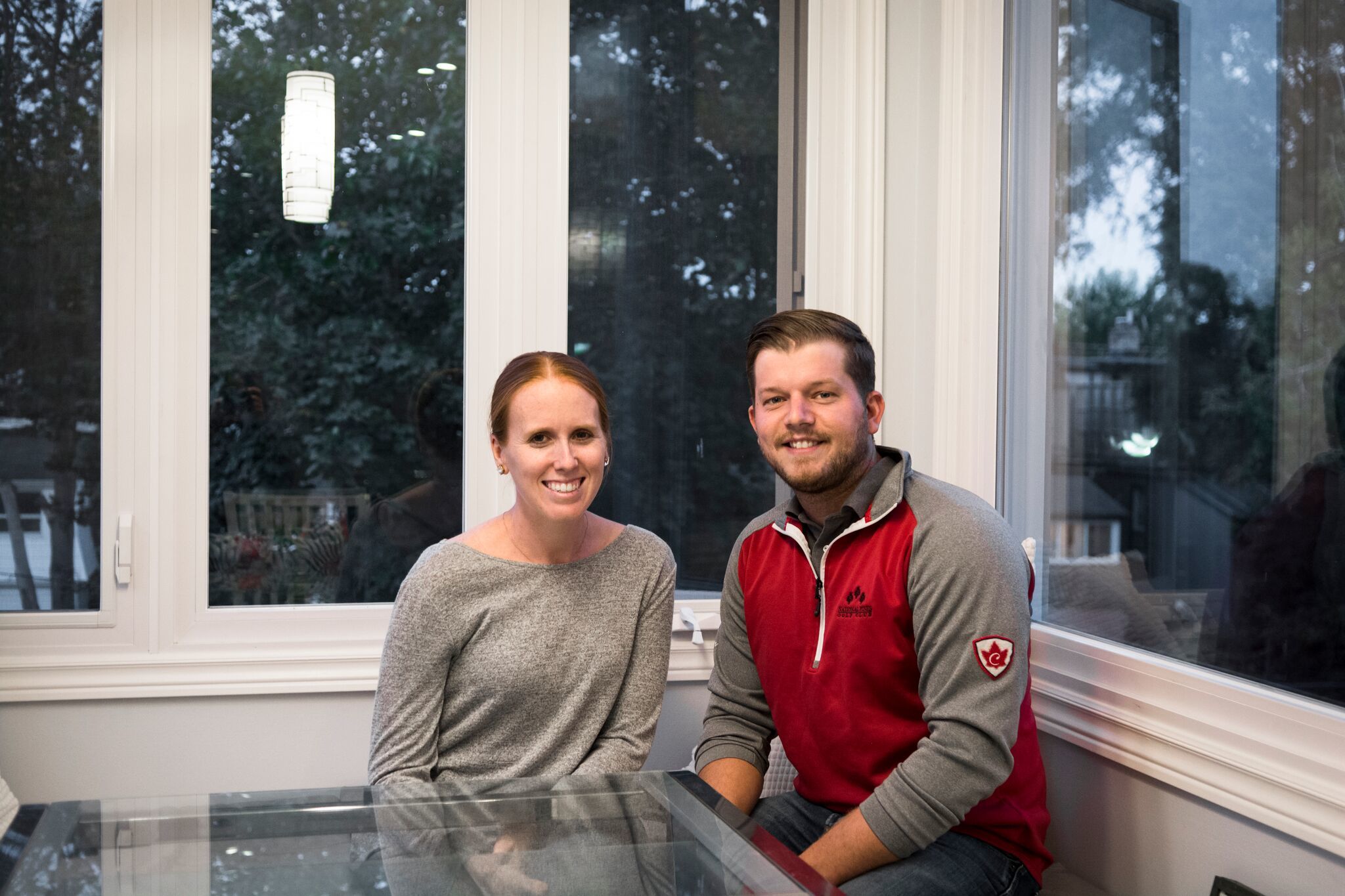 Jordan: Okay, so what happens if one of you wants to sell?

Julie: We did talk about that because Peter and I knew that at some point we were going to start a family and would outgrow this place.

We said that if the time comes when one of us wants to leave, the option would be for the other to keep the property. If it were us, we would keep the property and rent out the units we live in. So if Laura and John decided to move downstairs, we would take over the second and third floor and rent them out.

If, for some reason, that wasn't to happen at the time we wanted to leave, we would have to discuss Laura and John buying us out of the property or we’d all have to sell. Peter and I (Peter in particular) have always wanted to have a rental property. So it always made sense for us to think about it from that perspective,
if we did have to move one day.

Jordan: What has been the biggest challenge of co-ownership?

Julie: Really? That isn't a challenge.

Laura: That isn't a challenge.

Peter: We haven't really had any major challenges living together. We’re just four people, four personalities, sharing space and it's working great. But cohabitation is always a bit of a challenge. Thankfully, in our case, it has been a very, very small one.

Jordan: Honest answer. What have you found most rewarding about co-ownership.

Peter: Half the mortgage payment.

Laura: Yes, the financial rewards for sure. John and I would never have been able to afford a place in the beaches, in the city. So being able to purchase this beautiful house, and have the rental income from our tenant, was perfect for us. Plus, we're all really close friends and family, so it’s great seeing our niece grow up, and then when our baby arrives next March, it'll be even …

Jordan: I was like, "What's taking you guys so long?"

Laura: Had to squeeze that in…

Laura: Thank you, thank you.

Julie: One of the great things about it for us, obviously, in having a kid, is the extra help. Laura and John come downstairs and help us out. We also have started an amazing thing where we split cooking dinner during the week. One couple does Monday and Wednesdays, and the other does Tuesday and Thursdays. It’s also nice to have people helping out with chores around the house. We love that.
The guys especially love being able to hang out together.

John: And bounce ideas off each other from time to time.

Jordan: Okay, last question. Are there one or two tips that you'd give to anybody else considering co-ownership?

Peter: Yes, do it. And make sure when it comes to finances, you are very clear on what the plans are. Then be flexible with your plans, financial or otherwise, and just enjoy it.

Julie: Even though we didn’t do it, I would say that drawing up an agreement is probably a smart thing to do. Do it with people that you really enjoy spending time with because, although you have three separate units, you really do spend a lot of time together.  For us, it’s definitely a benefit but it could be a downside if you didn't like the people you were doing it with.

Jordan: Thanks for your time guys!